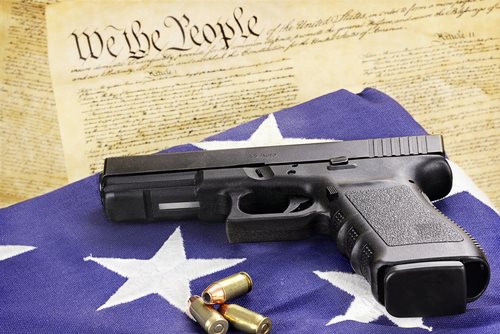 Earlier this month, a legislation offering expanded background checks on gun purchases was blocked in the Senate. The legislation, which set to expand background checks to cover gun purchases made online and gun-show purchases, did not receive the 60 votes needed to make it through the Senate. Instead, it was only able to get the support of 54 senators, with 46 voting against it. A measure to ban military style assault rifles was also blocked.

The expanded background check amendment was the result of an effort by Democratic Senator Joe Manchin of West Virginia and Republican Senator Pat Toomey of Pennsylvania. President Obama's had hoped that it offered the compromise needed to pass gun-control legislation after the Newton massacre, which saw 20 children and six educators killed by Adam Lanza at Sandy Hook Elementary school in Connecticut. Four Senate Democrats from traditionally gun-friendly states and most Senate Republicans voted against the measure.

The debate over gun control and gun rights is certainly contentious and elicits an emotional response from either side of the aisle. Opponents of the Manchin-Toomey amendment have emphasised that it infringed upon the right to bear arms and would do little to keep guns away from criminals or the mentally ill.

Guns Save Life is a civil rights organization that operates regionally and one that aims to educate the public about firearm ownership and its benefits. It started out in 1995 as a grassroots committee of the Illinois State Rifle Association, and has since grown to become an independent non-profit organization that represents the interests of gun owners in Indiana, Illinois and beyond. Guns Save Life engages in grassroots activism to defend and promote the civil right of self defense and firearm rights.

The following is an interview with John Naese of Guns Save Life, on his views on the failure of the gun-control to pass and the work of his organization to safeguard gun ownership rights.

1. How do you feel about the failure of the gun-control legislation to pass?

Legislation proposed "in response" to a particular horrific crime generally does more harm than good.  There are plenty of laws already out there, and none of the proposals would have stopped any of the recent tragedies.  We at Guns Save Life opposed Manchin-Toomey, for good reason.

2. Did you feel that the Grassley-Cruz gun bill, which included tougher laws on illegal gun trafficking, straw purchases, and aimed to increase efforts to keep guns out of the hands of the mentally ill and keep schools safe was a better alternative?

I don't know enough about Grassley-Cruz to comment on that one, but my above generalization stands.  The proposed new "solutions" generally result in lots of "unintended" consequences, most of which affect law abiding gun owners and citizens negatively, and none of which solve anything; they just result in more demands to close more "loopholes".

3. Do you think that maybe what is truly needed is to simply keep guns out of the hands of those who should not have access to them (e.g. the mentally ill)  rather than make it tougher for law-abiding citizens to purchase firearms?

What is truly needed is to allow law-abiding citizens to own, possess, and carry with them the means of self defense.  In the case of Newtown, murder was already against the law.  The murderer had already been denied a gun purchase, so he murdered his mother, stole her legally purchased and possessed firearms, and used them to commit murder.  What would have made a difference that day was an armed, trained adult at that school, willing to engage the murderer before he got to the classrooms.  We protect our politicians, celebrities, bank deposits, and jewelry with guns.  Why don't we protect our most precious possessions – our children – with the same fervor?

4. What are some of the accomplishments of Guns Save Life?

We print and distribute 15,000 copies or more of GunNews each month, host a popular informational website, hold well attended public meetings monthly, sponsor shooting events and youth camps that have trained thousands of children and adults over the years in the safe handling and enjoyment of firearms.  We have put up dozens of Burma-Shave style slogans along major highways, getting the pro-civil rights message out there to millions of Americans that might otherwise never come to our meetings or visit our website.  We have sponsored, with other pro-gun rights groups, lobby days in the Illinois State Capital that have drawn 8,000 or more to Springfield, on their own dime and on their own time on a weekday, to lobby their legislators for the right to carry and against onerous restrictions.

And we have fun doing it.

5. What are some of the future plans of Guns Save Life?

We will keep spreading the word that guns do indeed save life.  We are expanding our monthly meetings to more cities, and our membership is growing.  We will keep advocating for a good right to carry law here in the last unarmed state.  And when we get that law, it will, like all laws, be full of compromises and unpalatable elements.  And we will keep coming back to the statehouse to fix that law; to make it easier for regular citizens to take advantage of their human right of self defense.  We will expand our efforts to provide training, education, and fun shooting activities so that people can enjoy their rights.


Interviewed with John Naese of Guns Save Life, Philo, Illinois