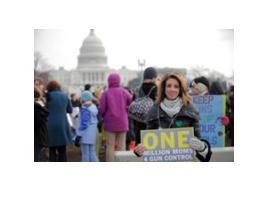 Earlier this month, the Senate blocked a plan to expand background checks for gun buyers. This plan, which was meant to extend background checks to online purchases and gun-show purchases, did not to get the 60 votes needed to pass in the Senate, receiving only 54 votes in favor and 46 against it. The proposed ban on military style assault weapons which was proposed by Sen. Dianne Feinstein also failed to pass with only 40 votes in favor and 60 against.

The background check amendment drafted by Democratic Senator Joe Manchin of West Virginia and Republican Senator Pat Toomey of Pennsylvania was seen by President Obama as the needed compromise that would help to pass gun-control legislation after the massacre of 20 children and six educators at an elementary school in Connecticut. The President hoped that this amendment would offer enough of a compromise so as to pass in the Senate. However, four Democrats and most Republicans blocked the legislation.

Gun rights and gun control are certainly contentious issues in our country that continue to divide public opinion. Opponents of the Manchin-Toomey amendment have emphasized that it only served to curtail the right to bear arms guaranteed by the Second Amendment and would do nothing to keep guns out of the hands of criminals or mentally ill. Proponents of the bill say that these types of background checks are what are needed to help save innocent lives. Some 87 Americans are killed daily by guns, including eight children under the age of 19.

Moms Demand Action seeks to make the country a safer, less violent place for children. It aims to do this by advocating for a ban on assault weapons and high ammunition magazines that hold more than 10 rounds; advocating for background checks for all gun and ammunition purchases; advocating for the reporting of the sale of large quantities of ammunition to the ATF and a ban of online sales of ammunition; countering gun industry lobbyists efforts at the state and federal level to weaken gun control laws; and advocating to make gun trafficking a federal crime.

The following is an interview with Shannon Watts, Founder of Moms Demand Action, on her thoughts and feelings about the failure of the gun control legislation to pass in the Senate and the work of her organization for greater gun control.

1. How did Moms Demand Action get started?

On Dec. 15, the day after the mass shooting at Sandy Hook Elementary School in Newtown, Connecticut, I spent an hour or so online looking for an organization like Mothers Against Drunk Driving, but for gun reforms. I was looking for an organization that would allow me, as a mother, to get involved in lobbying for stronger gun laws on the state and national levels. When I couldn’t find anything similar, I started my own Facebook page, originally called One Million Moms for Gun Control. Within hours and then days, I had thousands of offers of pro bono support and assistance from across the country. Just over 4 months later, we have 100,000 members and 100 local chapters across 40 states.

2. How do you feel about the defeat of the gun-control legislation in the Senate?

For the mothers of America, this is not the end. It is just the beginning. The mothers of America are sickened by our elected leaders’ inability to enact bipartisan, common-sense gun reforms supported by 90 percent of the American people. Instead, more than 40 Senators chose to do the bidding of the gun lobby. But we are not defeated. The Senate vote only strengthened the resolve of American mothers who are rising up to fight the influence and power of the gun lobby in this country.

3. What message would you send to those in the Senate who voted against this legislation?

If this Congress will not protect our children and families, we will find one that will. We will look to our state legislatures to take up the mantle of common sense and pass new and stronger gun laws. And, beginning now, we will work to elect leaders who are responsive to the best interests of Americans and not special interests.

4. How do you think the gun-control movement should move forward from this?

Congress continues to turn its back on common-sense gun laws that would make our children and families safer. But American moms will not be influenced or even intimidated by powerful gun industry lobby groups. We will not wait for one more horrific mass shooting of our children for legislators to wake up and finally pass needed laws that will save children’s lives. We will continue to pressure Congress to bring legislation back to the floor for a vote; we will work with our state legislatures to strengthen gun laws that Congress refuses to act on; and we will encourage moms to spend their dollars only at companies that have gun sense.

5. What is the next step for Moms Demand Action now that this legislation has been blocked in the Senate?

We will continue to pressure Congress to bring legislation back to the floor for a vote; we will work with our state legislatures to strengthen gun laws that Congress refuses to act on; and we will encourage moms to spend their dollars only at companies that have gun sense. And we will continue to focus on growing our membership and creating more chapters, especially in those states where intransigent legislators must be voted out at the midterms. 2014 will be an important year for Moms Demand Action for Gun Sense in America to show their power at the polls.