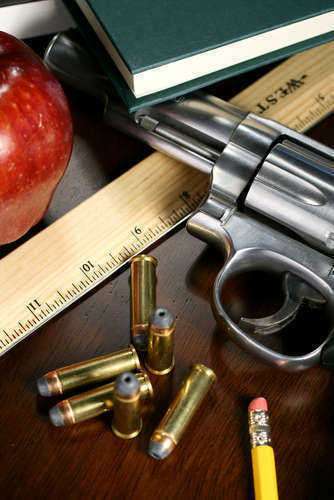 Types:
An automatic gun is any firearm that will consecutively rounds of ammunition and subsequently reload itself without manual loading or intervention. The automatic weapon comes in a variety of forms including:automatic pistols, automatic shotguns, assault rifles, and machine guns.
The term ‘machine gun’ carries two distinct interpretations, both a civilian and military classification. In military terms a machine gun is a large, ground-based, heavy-caliber weapon that is supported by a tripod or mounted on a vehicle. The military classification of machine gun is belt fed, meant for damaging air crafts or large buildings, and is subdivided into 4 groups. The military machine gun is not pertinent to everyday society.
The assault rifle is the most common form of weapon used by infantry men in the military. Assault rifles have detachable cartridges and possess selective fire, which enables the operator to switch from semi-automatic bursts to a fully automatic firing rate. Examples include M-16s and the G36.
The automatic shotgun uses gas to automatically reload cartridges, and is considered relatively uncommon. The average automatic shotgunuses a 12 gauge cartridge, is fed through an 8 round box magazine or 20-32 round drum magazine, and can fire at a rate of 350 rounds per minute. The automatic pistol is a hand held weapon that is magazine fed and can fire 1000-1200 rounds per minute. These weapons are most commonly used by law enforcement agencies and are extremely difficult to obtain for an average citizen.
Laws:
Automatic weapon as a “machine gun” that is capable of firing fully automatic rounds regardless of power, size, or ammunition. The term “machine gun” is not to be confused with the military definition, and was simply instituted by federal law to encompass all weapons capable of rapid fire. During the early 1920’s automatic weapons became popular, and the carnage they inflicted on society quickly grew uncontrollable. Organized crime members inflicted chaos on the society with the use of such weapons.
Following the lead of various state laws, then President Franklin D. Roosevelt instituted the National Firearms Act of 1934. This legislation which is still active today, forces a prospective automatic weapons buyer to partake in a comprehensive procedure which involves the United States National Treasury Department. Following the institution of the National Firearms Act many state governments adopted additional requirements necessary to obtain and use automatic weapons.
Concerns:
Although fully automatic weapons can fire endless rounds without human intervention, the impact that these guns have had on society are minimal. Violent crime statistics reveal that handguns have been the source of two million more murders via firearms than automatic weapons.
There have been only 2 documented murders via automatic weapons since the weapons were strictly regulates (some instances barred) from use in 1934. With scrupulous enforcement the ability to obtain such weapons is minimal. Handguns have flooded the market through black markets and illegal trade, the same cannot be said for automatic weapons.
There are currently 255,000 licensed automatic firearms in the United States-ownership is though to be split equally down the middle between law enforcement and civilian. This number seems high, but automatic weapons pose such great threats on society that the industry is essentially on lock down.
Thousands of guns are seized annually by the law enforcement agencies throughout the nation, however, only .7% of these firearms are of the automatic variety. Concerns over automatic weapons are minimal because the government has suffocated the market. Like buyers, manufacturers are significantly regulated in terms of production. The greatest risk associated with such powerful weapons is the what if premonition. What kind of carnage would ensue if these guns somehow ended up in the hands of a crazed individual?